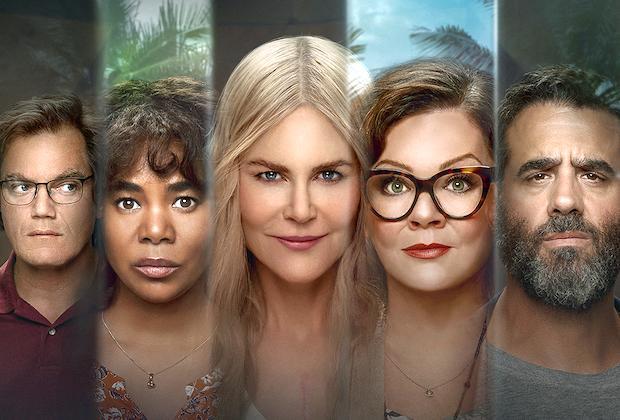 Nikki Gooley is a highly awarded celebrity makeup designer with an impressive career spanning over twenty-six years. During this time, she has worked with celebrities like Chris Hemsworth, Cate Blanchett, and Jodie Foster. Nikki has also worked on a number of high-profile projects including The Matrix, The Chronicles of Narnia, Star Wars, Mortal Kombat, and, most recently, the highly anticipated Lianne Moriarty television adaption Nine Perfect Strangers. Now that the show has premiered, we are delighted to announce that Eminence Organics was Nikki’s preferred skin care range on the set of Nine Perfect Strangers.

We had the opportunity to have a chat with Nikki about how she started her career as a makeup designer, skin care essentials during filming, and the top Eminence Organics products she used on set.

Let's go back to the beginning. How did you get started as a celebrity
makeup designer?

In high school I was in a drama group that ran out of the Seymour centre in Sydney. We had school holiday workshops where people from different theatre backgrounds would come in to teach us. One day a woman came in to give a demonstration on theatrical make up and showed us black and white reverse make up. It really fascinated me. After I went to a Fine Arts College, I was still really interested in makeup, so I enrolled in the Three Arts Make Up Centre. I fell in love with creating a narrative and telling a story through make up. It’s not just about making someone look pretty, you’re helping to create and develop a character with the actor. We had some great experiences working with film schools and from there I met different people, including makeup artists I really admired like Bob McCarron and Viv Mepham. I got the opportunity to work on Mad Max Beyond Thunderdome and from there I built up my experience. 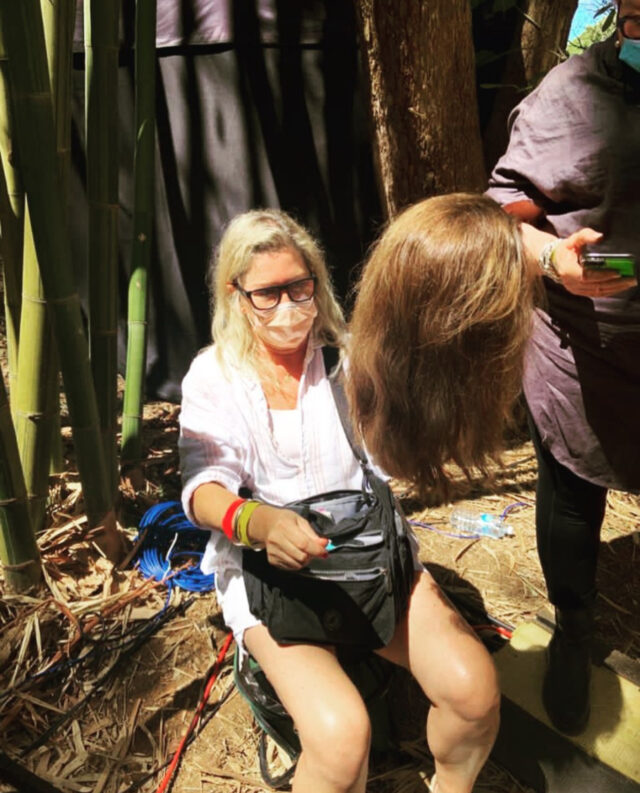 On a typical day the makeup artists come in and set up first. Then the actors arrive, and we would cleanse, tone, moisturise and perform any other prep we need to do. Depending on the plan for hair and wardrobe, it’s usually a good idea to let the skin sit for a bit before applying the makeup. Once we apply the makeup it’s pretty much hanging on set and jumping in when needed to do touch ups or fix up any hair or make up, particularly after an action scene.

Byron Bay was quite hot so keeping the actors looking cool and fabulous was a challenging feat on Nine Perfect Strangers. We needed the characters who worked at the health spa, Tranquillum House, to have that beautiful glow so we kept their skin deeply moisturised.

For the character Jessica Chandler, we had to make her character look like quite fake and over the top. This included heavy makeup, hair extensions, and fake nails. I even created fake veneers so that it looked like she had had her teeth done. This also worked to make her lips look fuller. It was a challenge because we had to keep her looking quite done up and then over the series the character slowly becomes more natural looking as she goes through her self-discovery journey.

Keeping the boys looking really natural and to look like they don’t have makeup on is also a challenge. The key is having a really good skin care base to act as a primer.

So good skin care in an important step in prepping the skin?

Absolutely, you need the skin to be stable so the makeup, whether it’s character or beauty makeup, will hold. It’s like applying primer to a house before putting on a coat of paint. You need to have a strong base to hold a really clean paint job on top. It’s also really important to remove the makeup properly at the end of the day so the actor’s skin is fresh and not irritated the following morning.

Sometimes we are using lots of glue in applying prosthetics or beards which involves alcohol to adhere and remove. It’s okay for a day or two but if we are shooting for twelve weeks, the skin gets increasingly sensitive, and you have to counteract that with good skin care in the morning and at the end of the day.

When did you first discover Eminence?

I’ve been a fan of Eminence for a number of years now. I used to come across it every now and then and purchased bits and pieces. I used it for the first time on Total Control and the women in the cast absolutely loved it. I used it again on other productions and it was great for the cast members who had sensitive skin. It reduced irritation and the makeup sat nicely over the top. There’s just something for everyone with Eminence Organics.

What were your favourite products to use on Nine Perfect Strangers?

I absolutely love using the Bamboo Firming Fluid, it’s so light and non-greasy. It was also really good to keep on set if any of the actors needed a little touch up. Another product all the women on set loved is the Marine Flower Peptide Serum. That and the Facial Recovery Oil are so beautiful.

One of the actors was prone to breakouts and I found the Acne Advanced Collection was useful to keep this at bay. It’s a great range because I find a lot of other brands have products that are too strong and contain alcohol that tends to strip the skin, which then leads to the skin overproducing oils to overcompensate and then the problem becomes worse.

Honestly, I find everything that I use from Eminence is clean and helps calm the skin. Plus, I love that for every product you purchase a tree gets planted!