Home » Interview with John Logue: Make Up Designer for Fires

Interview with John Logue: Make Up Designer for Fires

Interview with John Logue: Make Up Designer for Fires

Award winning Hair and Make-Up Designer, John Logue, has over thirty-three years’ experience in the industry. His recent work on Mystery Road and Hungry Ghosts saw him nominated for two Australian Production Design Guild Awards. With a strong background in television drama, John has worked on an impressive array of productions including Fires, The Newsreader, and Wentworth Prison.

I had the chance to have a chat with John and we discussed his go-to products to prep the skin for filming, how he started his career, and the only product that could remove the costume make-up on the set of Fires.

What are you working on at the moment?

We’re currently filming Mystery Road Season 3 about half an hour outside of town in Western Australia. At the moment I’m sitting in the Coles car park in Kalgoorlie with the aircon running because it’s the only place I could get phone reception!

What are your go-to products to prep the skin for filming?

It depends on the actor and what we are going to do that day. My go-to right now for one of our leads is the Mangosteen Gel Moisturiser.

"I pretty much use the moisturiser and a primer and that’s it. It makes him feel good and his skin looks good enough on camera with nothing else."

I’ve been working in the Northern Territory, Alice Springs, and now I’m in Kalgoorlie. We’re basically on bore water so everyone’s skin is super dry. The Mangosteen Gel Moisturiser sits on the skin beautifully without giving it a sheen. It also gives a bit of a barrier against all the red dirt and wind.

The Stone Crop Hydrating Mist and Soothing Chamomile Tonique come out after lunch when it’s time to do a refresh. Just a light spray on the actor’s face makes them feel better without changing or moving anything.

The Bamboo Firming Fluid is a big favourite to use around the eyes. An actor I had been working with was a bit tired, but we had to do his stills because he was leaving that day. I used the Bamboo Firming Fluid around his eyes and the results were immediate. He loved it. He said, ‘give me the name, I need to know it for me and for my wife’.

You can use the best make up but it’s what goes on first that makes it look good. Because we’re shooting in 4K anything you do on the skin shows so the make up isn’t that heavy. I can barely remember the last time I used a powder on an actor’s face.

"It's important for the skin to look good, you can't rest on the make up doing everything."

How do you remove all the costume make up from the actors?

Hungry Ghosts on SBS was quite a prosthetic heavy show. Often there would be a three to four hour make up call. At the end of the day to do one final removal of all that sticky stuff we’d use the Stone Crop Cleansing Oil. The Calm Skin Chamomile Moisturiser was also a sure thing because the skin had had quite a lot done to it during the day and it was great to use the moisturiser at the end of it. The skin would be a little bit flushed after all that so the moisturiser would calm it right down.

On the set for Fires, everyone was so dirty and sweaty and sooty. We tried using Isopropyl Myristate, an oily alcohol, but it didn’t get everything off. The Stone Crop Cleansing Oil, however, did. It was the only thing that worked. One time we got some Isopropyl Myristate on a costume and it stained. That’s what’s great about the Stone Crop Cleansing Oil, it washes out.

"It was, and always has been, my go-to cleanse."

How did you get started as a make up artist?

I did a four-year hair dressing apprenticeship and during that I did a two year make up course part time. One of my trade school teachers at the hair dressing school heard of a job going at Channel 10 and I got the job. I started in the make-up department where there was ten of us and we were rostered on to different shows like comedies, the news, or whatever was going at the time. I got to work with a lot of great hair and make-up artists. Then after a stint of neighbours, I got the head of department for Blue Heelers and my career has grown from there. I’ve had the opportunity to work on some really great projects and experience with film. I’ve sort of done a bit of everything, really.

I always try and retrain throughout my career. I did a course on contact lenses so I’m a lens technician now. And I like travelling overseas to do training. I think it’s really important to learn and grow as you get different experience across lots of projects. I knew when I was sixteen that this was what I wanted to do. It’s constant and hard work but I think I’m very lucky to have these opportunities, so I don’t take them for granted. I think they are a bit of a gift. 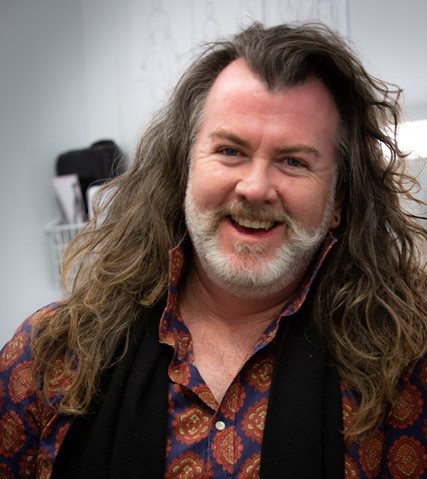